On Saturday, November 25th, in commemoration of International Day for the Elimination of Violence Against Women, more than 200 women partnered with PSYDEH and local officials to hold the fourth regional meeting of indigenous women leaders.

The forum was held in the center of Huehuetla, one of the four municipalities represented at the event; the others were Tenango de Doria, Acaxochitlán, and San Bartolo Tutopec. All are located in the Sierra Otomí-Tepehua region of Hidalgo.

PSYDEH produced the event in collaboration with indigenous women leaders, Programa Proequidad INMUJERES, the US Foundation Global Giving and local municipal governments. Building and expanding on the previous three regional forums since 2014, the event empowered indigenous women to: 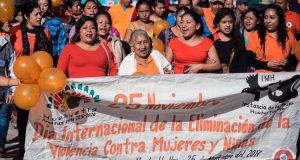 In addition to participating in a workshop and panel discussion about women’s political participation in Mexico, attendees took part in a town-wide walk against violence, watched a self-defense presentation by a local school, and created a banner in honor of the day. The women also produced the unprecedented Huehuetla Declaration of 2017, a document stating their demands and proposals for the well-being of their communities.

Organizers and supporters included PSYDEH staff, municipal and regional leaders, and volunteers from the United States, Brazil, and Guatemala.